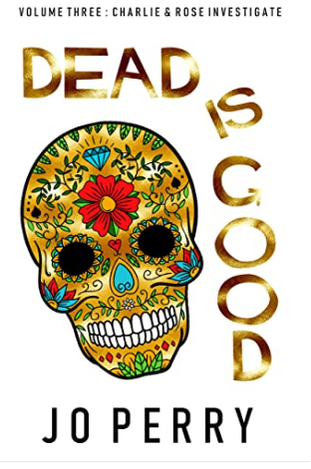 A woman opens fire on the North Hollywood Police Precinct and is almost immediately shot dead by the L.A.P.D.
Another woman throws herself off the edge of Santa Monica Pier.
One is suicide, one is art…
Welcome to the world of Charlie & Rose, everyone’s favourite ghost detectives.
Summoned once again from the afterlife, and cursed by death to only ever be on-lookers into the lives of the living,
Charlie and his dog companion Rose do their best to protect the only woman Charlie has ever loved. Life, it seems, is much more complicated than death,
and very quickly Charlie & Rose find themselves attempting to untangle a complicated and deadly web of suicide, art, drug gangs and the illegal sweat-shops of downtown Los Angeles.

"Like 'The Wire' Meets 'The Tibetan Book of The Dead.' Highly Recommended."––Derek Farrell

"This is the third in her hopefully continuing series of a dead man and a dead dog.  I enjoyed this one even more.  Hard to solve or prevent crime when you are dead and that’s the brilliant originality of these books. Charles Stone, helped by the dog Rose tries to prevent someone murdering his late wife in LA.  Starts with a bang and goes on surprising.  Highly enjoyable and unique…"––Eric Idle

"DEAD IS GOOD is as smart, funny, moving and original as anything I've read in a long time. Maybe even longer. Highly recommended."-- Dennis Palumbo, author of the Daniel Rinaldi Mysteries
​
"I love these characters — even while we readers don’t fully understand their circumstances, how they know where to go, what brings them to this world at certain times. Even while they don’t have much better of an idea than we do (at least Charlie doesn’t). I love how while they can’t interact with their environment, the people they see and events they watch unfold, they are driven to find answers, driven to care about what’s happening. There’s something about that compulsion — and success they have in figuring things out — that matters more than when Bosch or Spenser or Chin and Smith put all the pieces together to thwart someone.... For a good mystery with oddly compelling characters, once again, look no further than Jo Perry."––The Irresponsible Reader

Jo Perry’s DEAD IS GOOD is a mesmerizing exploration of the subtleties of our universally shared fate, neatly wrapped up in a crisp, can’t put down mystery by one of today’s most unique literary voices.”––Jeffrey Siger, bestselling author of the Chief Inspector Andreas Kaldis mysteries

"Jo Perry's DEAD IS GOOD is the best book yet in a solid-gold series: funny, sad, suspenseful, and totally original.
They're set in a world in which the dead can observe the living -- including those they love -- but can't lend a hand.
And her often-beautiful prose is uniquely her own."
––Timothy Hallinan, celebrated author of the Junior Bender, Poke Rafferty and Simon Grist mysteries.

"Dead is Good is a metaphysical detective novel: a meditation on the meaning of life—and of death.
It’s also an evocative and wickedly funny portrait of Los Angeles, a city whose disparate communities barely seem to connect.
But connect they do, and Perry draws the line between exploited downtown garment workers and ostentatious
Beverly Hills McMansions with the sarcastic, chronically dissatisfied Charlie and his sweet-tempered dog, Rose as our guides.
Sure, they’re both dead, but they live and breathe as characters whom you want so much to find some form of peace and happiness.
I can’t wait for their next case."
––Lisa Brackmann, critically-acclaimed author of  Dragon Day, Rock, Paper, Scissors, The Go-Between and other thrillers.