DEATH OF A SINNER BY DEREK FARRELL

A new Danny Bird anything is cause for celebration: A tweet from Derek Farrell mentioning his name or intimating that some Danny is forthcoming.

So go ahead and pinch yourself; it’s true: Baseball fans shouted “Lock him up!”
at Trump last night, there’s a brief, purgatorial Brexit reprieve, and our fave adorable, accidental detective/pub owner is baaack. Well, Danny’s not the owner, really––a retired criminal with flair for the machete is the owner of the slightly frayed Marquess of Queensbury, the pub/gay bar Danny runs when­­ it’s not running him. It’s complicated––like everything about Danny––who prevails with a bit of help from his employees/friends/lover––they’re a family of sorts––and his family family.

DEATH OF A SINNER launches with fierce, manic burst of cruelty, alights at the Las Vegas "Non-Stop Wedding Shoppe—Marrying Relentlessly since 1984”––and burns ever onward with a dark, naughty, hilarious, dead-on energy that is Farrell at his masterful, wickedly funny and empathetic best.

The cast and crew of a really nasty, thus hugely popular, reality television show, SINner’s Palace––from the creators of “The Real Househubands of Colchester,” “Dairy Farm Lock-in” and “Suicide Vest Karaoke” ––rent out the Marq for a few days of in-London filming.  And the life––if you can describe the claustrophobic and precarious existence of the show’s “star,” Cartier Cobb, a life––is in danger. Cartier enlists an unenthusiastic Danny to sort out the suspects, who unfortunately are literally everywhere.

Cartier Cobb ––“who did not make a sex tape”–– is a magnificent creation among a brilliant ensemble–– a vicious, breast-augmented, bee-hived, universally hated black hole of malice whose shtick is to extinguish, then swallow whole any glimmer of a human being who dares enter her orbit:

“…if I find out what motherfucker started this… I will gut them like a fucking trout – I did not send Cheryl Cole a shit in a jiffy bag. The rozzers have the offending article and I’ve offered to undergo a DNA test to prove that the poo in question is not mine.”

If you haven’t fallen in love with Danny Bird mysteries yet, here’s your piquant and delicious introduction.
If you’ve been pining for Danny you can go pre-order the novella right now.
It’s paired with a noir novella of mine––EVERYTHING HAPPENS–– in a sweet, retro  book edition that you will flip over. 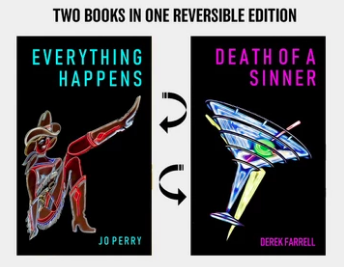